The Greatest Story Ever Told!

The Backstory: At the first Star Wars Galaxies (SWG) Fan Fest in 2004  – 2 players from the server Gorath,  Aquaria (male) and Bril-tari (female) had switched name badges while having some photos taken. Those photos ended up on the SWG forums for 1000’s to see.. and over the next year what transpired has now become that of legend.

The Setting: Early morning on Day 2 of SWG Fan Fest 2 (2005) in Anaheim .. a group of hung over Gorathian’s (who partied way too much the night before – drunk off cheap rum and whatever roofied Colombian elixir Aquaria had back in his hotel room) were clinging to the tables in the dimly lit back corner of the meet-n-greet room. It was Day 2 of the event and nerdom was in full swing with the kickoff of the SWG scavenger hunt around the Hilton Hotel.
and now ..

The Story: There was a handful of us Gorath folk nursing a wicked hangover from the night before that had ended us up back in someone’s hotel room for an after party that supplied us with a lot of “missing memories” from that night.  The people hanging around the tables included myself (in game names) = Chubes, Aquaria, Molotov, Schwendo, D-Star (token black guy) Lena, Flaux, Spence-Da-Man and the fucktards that dressed up like Jedi’s the day before I think one we renamed T-Queer. Not wanting to nerd the fuck up and go around the hotel doing an SWG scavenger hunt for the next few hours we opted to sit back and do some serious people watching.

Holy Shit!! It did not disappoint! A SWG nerdfest brings the basement kiddies outta the woodwork. You have never seen so many “homemade” in-game costumes that were a few sizes too small in your entire life.  We were looking around and all happen to see him at the exact some time. What caught our eye –  as soon as he entered the room .. was this small kid dressed to the 9’s in a 3 piece suit with a fistful of flowers and the biggest shit eating grin on his face. With our attention fully focused on him we watched as he went around the room from table to table meeting people from other servers looking at name badges for a moment and then would scamper on to the next group of people like he was on some hell bent mission.

Now, what seemed to be inevitable fate, He finally approached our group of half nauseous still drunk and trying to drink more fun loving group of Gorathians.  Turns out the little pimp was actually from Gorath and we embraced him as you would a drunk chick who passed out face down ass up. We assaulted the shit out of him verbally when we saw that His in game name was EZIINV (EZ 2 NV) whose real name happened to be Lesley and was in the Guild – Gorath Action Youth aka -GAY- (look at his nametag in the pic below – you can’t even make this up!!)

Curiosity got the best of us and we asked him what the flower’s and the get up was all about. He began to explain to us this whole elaborate story and that’s when things started to make sense. He told us he was there to win the heart of his in-game girlfriend.. to woo her if you will .. the girl he’s been in love with in game for the past year. He wanted to prove to her that this “romance” was much more than just an in game fling. He had been giving her a ton of loot, credits, all sorts of in game shit and finally wanted to make it official. So he had his grandfather drive him up, brought along a buddy as a wing man, and even paid the full admission to get into fan fast just for that 1 day. As he was telling us this story we had been introducing ourselves to him. Now Aquaria hadn’t been there at first when he come over to our table and as he slowly approached our table.. I made sure to have camera in hand and ready.

Aquaria walks up to the table (like a rapist in the midst)… this kid reaches up and picks up his name badge to read it.. takes one look .. reads the name .. looks up at Aquaria… and with what can only be described as an instant deflating sound of one’s entire lung capacity this kid let’s out a low hiss of .. “nooooooooooooo” and drops the name tag. I have never since been witness to a more magical moment then watching the look in this kids eyes as he starts to doubt his sexuality, his life choices, his entire existence as it flashed by him in the matter of a second or two. (not even the time I accidentally shot my load and it ended up both nostrils of my exgirlfriend have i seen the most perfect look of bewilderment in a persons eyes)

The kid standing there stunned, tears beginning to well up in his eyes.. I told Aquaria to take a picture with him and that is the photo that you see before you.. Aquaria’s arm wrapped around the back of that suited up – pony tailed – pimply faced – shattered ego of a young buck who now must question his sexuality because of the merciless world of online romances .. catfishing to the extreme.

After that picture was taken .. he tucked tail and ran out – throwing the flowers in the trash and on the ground.. he took his wing man with him .. called up his grandfather for a ride home and had wasted 100 bucks on an entry fee to only leave us with the most epic picture and story that has ever been witnessed by a group of Gorathians 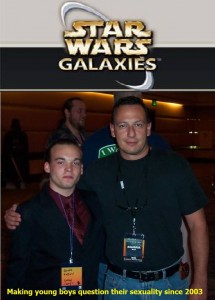